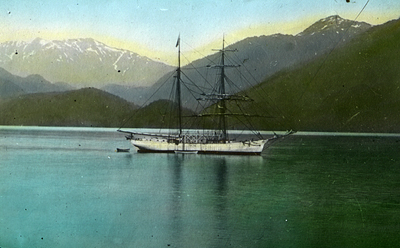 Hand-tinted lantern slide of the Galilee, 1907

The Galilee was the Department's first attempt at surveying the magnetic field on an ocean. The Department would eventually have to build its own custom vessel, but to begin the endeavor chartering a ship was more feasible. As much magnetic material as possible was removed, supposedly even spinach and raisins were eliminated from the crew's diet. However, the very bolts holding the ship together were iron and couldn't be changed. Thus, while greatly reduced, the vessel's own magnetic field was strong enough to require intricate, time-consuming manuevers called "swinging ship."  (see definition). Three cruises were conducted in all parts of the Pacific Ocean between 1905 and 1908. After only four years aboard the Galilee, the Department set to work building its own vessel to overcome the Galilee's short comings. However, the Galilee made valuable contributions to the magnetic survey work.  Observers were trained, techniques perfected, instruments improved, and useful data collected, despite the time it took to reduce. J. P. Ault worked as an observer aboard the Galilee, and later served as captain of the Carnegie for most of her voyages.

After its service with Carnegie, the Galilee returned to commercial work. Pieces of the Galilee have survived and are at the Benicia Historical Museum in Benicia, California, and the San Francisco Maritime National Historical Park. To read more about the Galilee's work, see Diane Cooper's 1998 article "Surveying the Pacific: The Voyages of the Galilee, 1905 - 1908," in Mains'l Haul published by the Maritime Museum of San Diego. 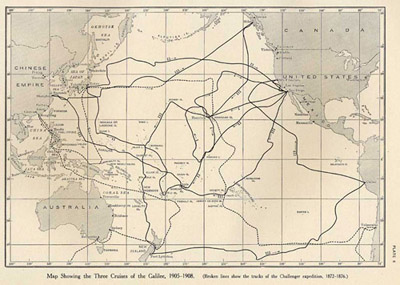 Map depicting the three cruises of the Galilee.

"Swinging Ship was the procedure the Galilee crew followed in order to ascertain the amount of local deviation or compass error on each heading. The procedure entailed setting a watch to local apparent time, heading the ship north and taking an azimuth of the sun. The deviation was obtained by comparing the compass and true bearings of some distant object ashore (if in port or near shore), or the sun. The crew then swung the ship to the right, steadying on successive headings varying 15, 30, or 45 degrees according to conditions, and, after remaining on the new course for a few minutes, observed the deviation on each heading. After completing a set of observations made with the right rudder, another similar set was obtained with the left rudder. Intervals of 15 degrees provided the most accurate data for mathematically determining the derivation for the intermediate points." [from "Surveying the Pacific: The Voyages of the Galilee." Diane Cooper. Mains'l Haul: A Journal of Maritime History vol. 34, no. 1 (Winter 1998): 36-47.]