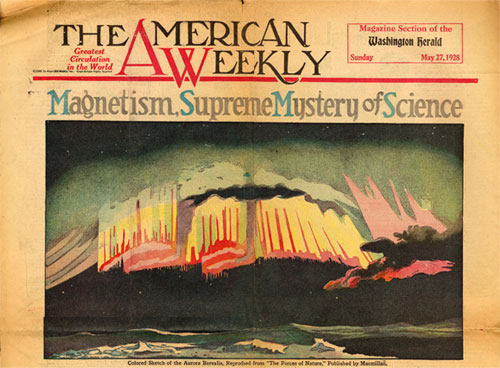 To see the bottom of the page with news story click here.

At the time of DTM's founding in 1904, geomagnetism was already an area of intense scientific inquiry – though just becoming recognized as a distinct branch of science. The connection of geomagnetism with mysterious phenomena like the aurora borealis or Northern Lights captured the public's imagination, as well.

For centuries, seafarers had been interested in the 'variation of the compass.' They observed that the compass needle deviated from true, geographic north and that the amount of this deviation (the magnetic declination) varied from one location to another on the globe. English astronomer Edmond Halley published the world's first magnetic declination chart in 1701, showing the 'lines of equal magnetic variation' in the Atlantic Ocean.

The compass needle was also found to point downward or 'dip' relative to the plane of the horizon – the magnetic inclination. Like declination, the inclination was observed to vary over the Earth's surface. By the late 18th Century, by comparing observations made over extended periods of time in London and Paris, it became clear that both declination and dip also changed with time (secular variation). Techniques to measure the strength, or intensity, of the magnetic field were developed in the 1770s. A variety of instruments were invented to measure these magnetic elements, as scientific curiosity – rather than purely navigational needs – began to drive the study of terrestrial magnetism.

The 19th Century saw the establishment of magnetic observatories, national surveys, and the beginnings of international cooperation in amassing geomagnetic data. Germany, Britain, France, and the U.S. led the way, but by the turn of the 20th Century large areas of the globe – particularly the oceans – still remained unsurveyed.

Under L. A. Bauer's leadership, Carnegie's Department of Terrestrial Magnetism launched the first 'World Magnetic Survey' (1904-1946) to measure the magnetic elements in these far-flung, unstudied areas. The Department was also to serve for forty years as a central, coordinating bureau for intercomparison and analysis of data collected by government surveys.

While DTM withdrew from geomagnetic research nearly six decades ago, its name still serves as a reminder of its historic role. Today, geomagnetic monitoring in the United States is the responsibility of the National Geomagnetism Program of the U.S. Geological Survey. The National Centers for Environmental Information (formerly the National Geophysical Data Center) in Boulder, Colorado is the central agency archiving geomagnetic data from surface, ocean, airborne, and satellite measurement and making them available to the scientific community.

To learn more about geomagnetism

'Geomagnetic Field, Frequently Asked Questions' – National Centers for Environmental Information. Excellent source of educational information: How does a compass work? Where are the magnetic poles? Will the magnetic field reverse? etc. (You can easily compute your declination for any place on the earth using this link.)

'The Great Magnet, the Earth' - Dr. David P. Stern. Educational site on the history and science of geomagnetism, with glossary, timeline, Q&As, notes for teachers.

A Brief History of Geomagnetism and A Catalog of the Collections of the National Museum of American History, by Robert P. Multhauf and Gregory Good, Smithsonian Institution Press, Washington, DC, 1987. Excellent overview, with photos and descriptions of historic geomagnetic instruments.